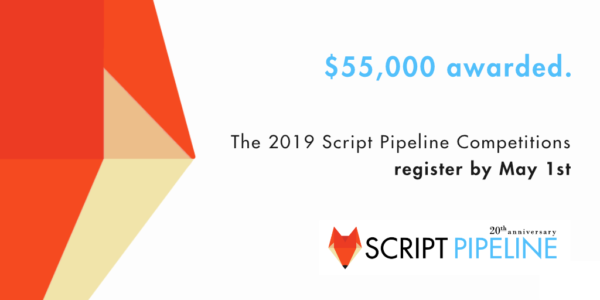 Writers:
For over 20 years, Script Pipeline has introduced emerging screenwriters with the industry.
Produced films include Universal’s Snow White and the Huntsman and the upcoming Stuber from 20th Century Fox, as well as recent indies The Standoff at Sparrow Creek and the romcom Off the Menu.
Several more films are in various stages of development and pre-production, and recent TV writers have been connected with execs for potential staffing opportunities.

“The impact Script Pipeline had on my writing career is extraordinary. Winning the contest directly led to my new representation, which in turn led to working with studios such as 20th Century Fox and Paramount.”
– Tripper Clancy (Stuber)

• $50,000 to winners, $5,000 to runner-ups
• Introductions to managers, producers, agents, directors, and others searching for TV writers
• Long-term script circulation to industry and continual guidance connecting with companies
• Development assistance from Script Pipeline’s senior execs
• Additional script reviews and consideration of other material for industry exposure
• Invitations to writer and industry events hosted by Pipeline Media Group

NEW THIS YEAR: all entrants may request a no-cost Q&A follow-up call with a Script Pipeline exec.  Read More

This site uses Akismet to reduce spam. Learn how your comment data is processed.

So It Is Written

PEN OF THE WRITER

Bringing Readers and Writers together since 2000

The Literary World of Sylvia Hubbard

Scribblers, Screamers, and other Wordslingers